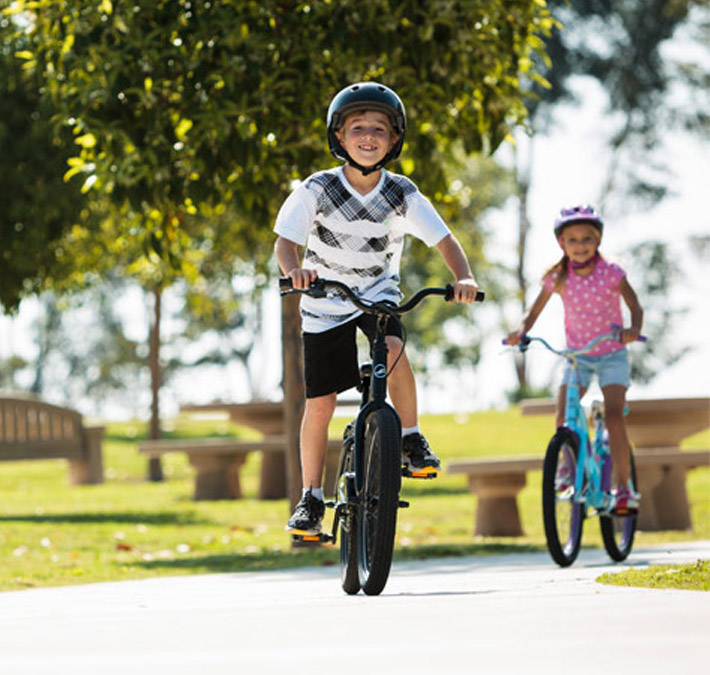 For years my wife and I have been what you would call as recreational riders. We both love any opportunity we get to go out and just see the country in ways you wouldn't see from your car. We have always been that couple who would take our bikes on holidays and explore different parts of the country from Yorkshire down to Cornwall. Everyday is an adventure when you can get out and explore the hidden parts of the UK.

Fast forward a few years and we have since become a family and our first was now old enough to start cycling. With our daughter, her grandparents brought her a bike with stabilisers which she would love to ride weekly with us walking behind in tow. We decided that it was time for her to have a new grown up bike and ventured into Newdales where we were met with kind and knowledgeable staff. It was at this point we were introduced into Frog Bikes. We could not believe the difference in terms of build quality and weight. We were ensured that by taking the weight out of the bike that it would be easier for our daughter to ride without stabilisers. So we took a punt and purchased a really nice bike for our daughter which she loved, the benefit of getting it in pink was a huge bonus.

So with her new bike in tow, we went off on our holiday, I can quite happily say that neither my wife or I was disappointed with the result that our daughter within the space of a week was now riding a pedal bike all on her own without the assistant of us. The difference in having a light weight, well built child's bike for children to learn on is a must. We cannot thank Newdales enough for introducing us to these types of bikes.

With this important lesson learnt, We followed the same path with our son. This time we went straight to a balance bike for our son which he loved using and he became very quick on it, To the point where we would be running after him in case he fell. Once he got to the stage of needing a new bike, We went back to Newdales and purchased another lightweight bike, This time Giant had released their new line of bikes for children called the Giant ARX. Being extremely similar to the Frog Bikes we figured we would give one a go?

Well what can we say, The Giant ARX was just as impressive as the Frog Bike, My son loved the fact that it came in lime green. We figured the transition from balance bike to pedal bike would be the same as our daughter, But within 30 minutes of riding his pedal bike, He'd grasped the concept of pedalling as was off.

This was perfect as it now meant that we could also get our bikes out and cycle as a family. Quite often during the spring and summer, we make our way to local riding areas which are friendly for the children. Two places that are never disappointing is Thetford Forest which offers fantastic cycling trials for children and when we're all tired, The Cafe on site is a helpful rest area. The other is Ickworth House which equally has lovely trails and areas to stop and admire the countryside.

I'd lastly like to say thank you to all the staff at Newdales for their knowledge and time spent with us and our children. When new bikes are needed we won't hesitate to come back here. Can't Thank you enough for what they do....

Send us an email, give us a ring or pop into the shop. We endeavour to answer all enquiries within 24 hours on business days.